Once in a while we pull back the curtain and take a peek at the sausage-making in the world of journalism. We think this is important, since the founders believed that the only thing that can save a democracy is a free press. That is true, assuming that the press is free, which it is not. In an interesting twist of fate, I have a master’s degree in journalism from one of the best schools in the States. This is relevant, since the media as it stands doesn’t think I am smart enough to be a critic, and it thinks the same of you. Have you abandoned your print newspaper for cause? “No problem,” the media says. “You are an idiot and we are going to digital, where nobody can count our responses.”

So let’s take a peek at one current controversy the press has decided to rule as “decided.” Here is a quote from last week’s release from the Columbia Journalism Review (CJR)– one of the most-influential publications for the media by the media. In  this case, climate change.

Today marks the beginning of a global climate strike and Monday will bring the UN Climate Action Summit, so we’re dedicating this installment of our newsletter to media coverage of climate, and whether it’s getting any better.

This spring, CJR and The Nation co-founded Covering Climate Now, an unprecedented journalistic collaboration aimed at strengthening news coverage of the defining story of our time. The project was embraced immediately by The Guardian, which became our lead media partner, and has since grown enormously: more than 300 news outlets from around the world—with a combined audience of more than 1 billion people—are now part of Covering Climate Now. More are joining by the day.  Each of these outlets—big and small, TV and radio, print and digital—committed to running a week of strong coverage in the lead-up to the UN climate summit, and they have delivered.

A highlight was an exclusive on-camera interview with UN Secretary General Antonio Guterres—conducted by Mark Hertsgaard of The Nation, Mark Phillips of CBS News, and Amanda Mars of El Pais and shared with all 300+ Covering Climate Now outlets—that reported for the first time the pre-conditions that countries had to meet for their leaders to address the summit on Monday. In the spirit of collaboration central to the Covering Climate Now project, Hertsgaard wrote a news story in English, Mars wrote one in Spanish, and CBS shared video and audio of the interview with all participating outlets.

If that does not make the hairs on the back of your neck stand on end, it should. Irrespective of your personal stand on climate change, this is proof-positive that there is a massive, collective effort to skew the news. To create propaganda and overwhelm any remaining vestiges of independence in the media.

In this brief quote, you are looking at the heartbeat of a movement that has similar programs and similarly well-defined positions on virtually every so-called controversy you see in the media. Are you interested in what you MUST believe in terms of gun control, gay marriage, marijuana legalization, abortion or euthanasia? I can tell you without looking. It’s all in the media, to include movies, television, newspapers and magazines, and is coming under control on Fakebook, Twitter, YouTube, Instagram and Google. In this new age, you are actually not welcome to your own opinion, or, if you are, you are welcome to keep it to yourself or get shamed, criticized, outed, shadow-banned or fired from your job.

You may have seen the kerfuffle last week when Canada’s Prime Minister got discovered in an old photo wearing blackface and brownface at multiple parties in his past. I have no use for Justin Trudeau. He is an arrogant, selfie-enamored, petulant child of privilege, and he is the necessary result of letting people under 35 vote.

So much for Justin. However, he is not a “racist.” Let’s establish that I have never personally participated in any event where I or any other person made up in blackface or brownface. When I have heard of it, I regarded it as tacky. Low-class. The product of an unimaginative mind.

So back to climate change. They say human-influenced climate change is settled science. The thing is, if it’s settled science, why is the funding, reporters, ink and collaboration to force a point of view on the media’s audiences? I am not about to say there is no climate change or that whatever there is has not been caused by humans. However, wouldn’t the science be supported better if a bunch of ninnies were not promoting it? I mean, nobody is up in arms about whether water boils at 212F. Or why did the “scientists” at the University of East Anglia – the repository of climate data for the world – get caught falsifying their data? You can read about it on Wikidiot, here, and they have an explanation. But it doesn’t answer the question of why?

“Why?” is a very important question, which my colleagues in the media should have discovered in JN101. People subscribe to newspapers because they want reliable information, not because they want to be a target for every new shoe salesman on the internet.

Why, for example, is an essay like this important for the wood industry in the United States? There are a hundred reasons, but for starters, look at what’s happened since 2007. We lost Modern Woodworking, Wood Digest, Wood and Wood Products and spin-off publications associated with those titles, as well as other primary print publications. If that trend continues, all that will be left will be commercially directed digital efforts from the wealthiest or most aggressive suppliers. And they will say, as do the current mainstream media, “trust me.”

There is an army marching against you, both in your consumer hat and in your industry. Worse, you have very few troops left of your own. We keep tweaking the self-proclaimed “voices of the people,” hoping that we can draw them into a debate.

So far, that has not gone particularly well. For example, I scolded a few on a media site about using made-up, foolish pronouns to try and show their self-emasculation. They got mad and said that the fake pronouns are the new reality. I remarked that in j-school they should have learned that the media should be the preserver of Standard Edited English (SEE), and that we can let the popular culture ebb and flow as it will, yet provide a sensible, understandable communications medium. Journalists are supposed to be the conservators of culture, not the destroyers of it.

I would love to learn who says I need to use their pronouns or not wear blackface if I choose. So far, all I see is monkeys in a circle, all fingers pointing left.

Would you like to do something? For one thing, contact your industry suppliers and tell them you read this column and would like them to support independent voices that stand up for the industry. For another, send a copy to your local newspaper and your favorite remaining magazines, along with your federal and state representatives. We are relatively certain it will have no effect, but if you rattle their cages enough, they eventually have to listen.

If you don’t, then we have to be content to hear from CJR next month that marijuana edibles make you intellectual. 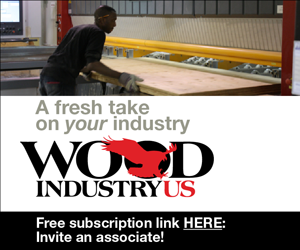 Model HES3D-90BL hinges from Sugatsune suitable for furniture and cabinetry tackle applications where heat and humidity can fluctuate. Hinge leaves separate so the door can be removed during … END_OF_DOCUMENT_TOKEN_TO_BE_REPLACED

Cabinets, closets, millwork and furniture are applications suitable for the Lockdowel dowel system. Operations can save money by switching to the tool-less assembly system since it does not … END_OF_DOCUMENT_TOKEN_TO_BE_REPLACED

The Nemo battery-powered, handheld vacuum sucker from Eurotech is a mobile, electric device that can attach itself to most surfaces. It achieves a holding force of up to 170 kg, allowing to move … END_OF_DOCUMENT_TOKEN_TO_BE_REPLACED